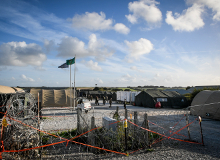 Trident Juncture 16 was my fifth exercise with the Allied Rapid Reaction Corps (ARRC). This year, the ARRC returned to RAF St Mawgan, just outside of Newquay in Cornwall. The purpose of the exercise was to evaluate NATO’s Joint Force Command HQ in Naples before it assumes the role of the headquarters of the Very High Readiness Joint Task Force (VJTF) in 2017. The exercise was also designed to certify that the ARRC is ready to take on the role of the Land Component Command of the VJTF next year.

As reported elsewhere (see here and here), Trident Juncture 16 was set in Estonia, which was threatened by a fictional adversary. The scenario saw NATO nations respond to this threat within the context of Article 5 of the North Atlantic Treaty across the land, maritime, air, space, information and cyberspace domain.

From a legal point of view, Trident Juncture 16 was in certain respects more straighforward than prevoius exercises. Few questions involving the classification of conflict or the rules governing the use of force arose. However, the scenario made up for this by generating a steady stream of legal challenges across a complex and particularly wide spectrum of law. These included questions relating to the classification of persons, status of forces, rules of engagement, environmental protection, protected zones, prisoners of war, cultural property, human rights law, wounded, sick and deceased, targeting, host nation law and influence operations. Once again, the professionalism of the headquarters in dealing with these issues has been impressive.

Equally impressive were the real-world surroundings. The end of October is not the best time for sleeping and working in a tent, but this year the weather has been especially kind: mild temperatures, little wind, mostly sunshine and some spectacular Cornish sunsets. Although the working day started at 06:15 and finished after 21:00, this routine was made a lot more enjoyable by the steady supply of coffee from the brew tent and the amazing food prepared by the ARRC Support Battalion.

Below is a short teaser.