The UK’s New Derogation Policy for Armed Conflicts: Making a Success of the ECHR? 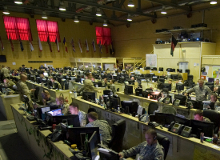 Speaking at the annual conference of the Conservative Party on October 4, U.K. Defence Secretary Michael Fallon sought to reassure Britain’s nervous allies and the general public about the implications of Brexit. Leaving the European Union, he said, “does not mean we are stepping back from our commitment to the security of our continent.” The Government is investing in new aircraft carriers, maritime patrol aircraft, attack helicopters and armoured vehicles to ensure that Britain is “ready to defend freedom and the rule of law to advance democracy and protect human rights.”

But new equipment is not enough. As the Defence Secretary explained, the Government will also take action to protect the British armed forces from vexatious human rights claims. This new derogation policy should not come as a surprise. In its election manifesto of 2015, the Conservative Party had promised to ensure that the armed forces are not subject to “persistent human rights claims” when acting overseas (Conservative Manifesto, p. 77). Nevertheless, Michael Fallon’s announcement marks a dramatic shift in government policy. This post examines that shift and its implications. It suggests that the potential costs of the Government’s new derogation policy could be considerable and its benefits remain uncertain.