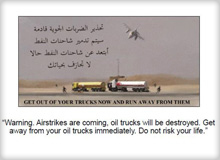 In this comment, I offer some thoughts in response to Butch Bracknell’s recent post on the targeting of ISIL oil transport trucks by the US in eastern Syria. As has been reported in the New York Times, the aircraft carrying out these strikes have issued advance warnings to persuade the drivers to abandon their vehicles before the attacks commenced. Bracknell accepts that a number of policy reasons militate in favour of issuing advance warnings in the present case. However, he suggests that such warnings were not in fact required by the law of armed conflict.

It is useful to revisit this assessment, partly because the legal and policy consideration seem to be more closely aligned than Bracknell’s conclusion suggests and partly because the case brings to light some interesting aspects of legal inter-operability.

Revisiting the case suggests, first, that the law is more nuanced and the assessment of the battlefield status of the targets requires greater care. Second, if for practical reasons it was not possible to positively identify the status of all of the individuals associated with the trucks to a degree of reasonable certainty, it follows that any individuals not so identified had to be presumed to be civilians enjoying immunity from attack. As such, it would have been necessary to avoid, or in any event minimise, incidental harm to these individuals. Consequently, issuing advance warnings would have made sense not solely from a policy perspective, but it would have also responded to the requirements of the law of armed conflict.