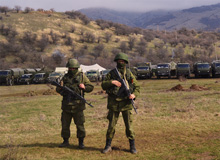 I recently had the pleasure and privilege of convening a workshop on the legal aspects of hybrid warfare and influence operations at the Strategy and Security Institute of the University of Exeter in the United Kingdom. Held in collaboration with the NATO Office of Legal Affairs (many thanks to NATO Legal Adviser Steven Hill) and the Allied Rapid Reaction Corps, the event brought together senior legal advisors and experts working in a national and international capacity over the course of one and a half days.  The workshop was held under the Chatham House Rule. While this prevents me from describing the proceedings and participants in greater detail, I have written up my thoughts on the subject, shaped in part by the discussions we had at Exeter, in a blog post published at Lawfare.

As I explain in greater detail in the post, the legal aspects of hybrid warfare raise three main questions. The first is a conceptual one. Is hybrid warfare merely a buzz word, convenient in the eyes of some but irritating to the ears of others, or does it actually denote a new stage in the evolution of warfare? The second question concerns the legal challenges posed by hybrid threats. While some commentators suggest that hybrid warfare is not a genuinely novel development and as such does not present novel legal difficulties, my own view is that the systematic exploitation of legal arguments for strategic ends in our current legal environment does present a new combination of challenges. The third question concerns the response to hybrid threats. I am not convinced that efforts to reduce legal ambiguity, thereby attempting to cut one of the lifelines sustaining hybrid warfare, offers a complete solution. Developing sound policy and doctrine would seem to be a more effective approach.