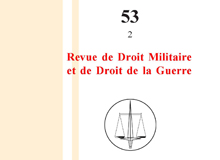 Jaloud v Netherlands (2014) is the latest in a growing line of Strasbourg jurisprudence addressing the application of the European Convention to military operations conducted by its Contracting Parties outside their national territory.

The case arose out of the fatal shooting of Azhar Sabah Jaloud by Dutch troops in the early hours of 21 April 2004 at a checkpoint in south-eastern Iraq. The application was brought by Mr Jaloud’s father, who claimed that the investigation carried out by the Dutch authorities into his son’s death was inadequate and therefore in breach of the Netherlands’ procedural obligations under Article 2 of the European Convention on Human Rights (ECHR).

In this paper, I argue that the European Court has taken one step forward by introducing the notion of full command into the debate on extra-territorial jurisdiction, but two steps back by sowing unnecessary confusion with regard to the applicable rules of attribution. The judgment suggests that the exercise of control over a checkpoint is sufficient to trigger Article 1 of the ECHR even in the absence of effective control over its geographical surroundings. This may stretch the extra-territorial applicability of the ECHR to its breaking point.