The Fable of the Law of the Flag 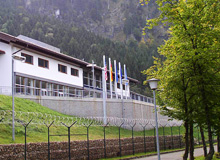 For a couple of years, I have contributed to the NATO Legal Advisors Course at NATO School Oberammergau. In the past, I spoke about the European Union’s practice in the field of status of forces agreements and the application of the rules of international responsibility to NATO. This year, my brief was to place the NATO Status of Forces Agreement of 1951 into its broader context by providing an overview of the legal framework governing the status of foreign armed forces in international law. In doing so, my aim was to dispell two persisent myths: first, that the so-called ‘law of the flag’ principle represents the traditional position of international law in this area and, second, that in the absence of status of forces agreements, soldiers enjoy the same legal position as tourists. Below, I briefly explain why both of these assumptions are wrong. The presentation was based on a forthcoming paper which offers a more detailed overview of the legal status of foreign armed forces in international law.

Myth No 1
There are two main schools of thought about the scope of the privileges and immunities enjoyed by foreign armed forces under general international law. According to the doctrine of absolute immunity, also known as the principle of the law of the flag, friendly foreign forces are completely exempt from local jurisdiction during their presence abroad. By contrast, the theory of concurrent jurisdiction suggests that the immunity of foreign troops from local jurisdiction is not absolute, but that sending States and receiving States exercise their jurisdiction in different areas.

Occasionally, the law of the flag doctrine is portrayed as the traditional legal position which over time gradually gave way to the more progressive principle of concurrent jurisdiction (see for example the Suprema Corte di Cassazione in the Lozano case). This suggests that the principles governing the status of foreign armed forces have evolved in a linear fashion in a way that is reminiscent of the development of the law of State immunity from an absolute doctrine to a limited theory. This view rests on a double misunderstanding. First, the notion of a seamless evolution is not borne out by a more detailed historical analysis. The doctrine of the law of the flag never became the dominant principle governing the status of friendly foreign forces, but was merely one amongst several competing approaches (see for instance Wright v. Cantrell (1944) 44 SCR (NSW) 45). Second, and this is the more important point, the idea of progressive evolution wrongly assumes that a single principle is capable of defining the legal status of foreign forces regardless of their operational context and that one of the competing approaches is therefore more appropriate than the other. This overlooks the fact that the status of the armed forces is not regulated in a uniform manner under international law. Rather, international practice demonstrates that different legal arrangements are considered appropriate for different circumstances, ranging from the broad exemption of combat forces from the adjudicative and enforcement jurisdiction of their adversary during armed conflict at one end to the sharing of jurisdiction by sending and receiving States in the context of military alliances on the other.

Myth No 2
It is often assumed that in the absence of an international agreement defining their legal position in express terms, the status of friendly foreign troops abroad is the same as the status of tourists. This is most emphatically not the case. National armed forces are organs of the State to which they belong. As such, national armed forces benefit from the principle of State immunity whenever they carry out acts of a public nature, while individual service personnel are covered by functional immunity for acts performed in an official capacity. These immunities are well-established in case-law and international treaty practice. However, national armed forces are also State organs unlike any other. Their distinct function and nature was recognized in Recommendation 1742 (2006) adopted by the Parliamentary Assembly of the Council of Europe in the following terms:

The army is the institution which is responsible for protecting the state and defending the community. Combat is its raison d’être, the very purpose of its existence, and it is bound by the specific constraints of rules regarding unity, hierarchy, discipline and compliance with orders.

As this passage underlines, national armed forces are a key component of the modern State, protecting it from internal and external foes and projecting its power beyond its borders. They guarantee its identity, integrity and continuity. International law recognizes that, unlike tourists, the armed forces are entrusted with unique responsibilities and for this reason merit special legal treatment. For instance, even in the absence of an express agreement, sending States may take measures in the territory of another State which are reasonably necessary for the internal administration of their forces as effective military units. The proliferation of status of forces agreements during the second half of the twentieth century, and their emergence as the main source of law governing the status of foreign forces, has obscured the existence of these general principles and rules under customary international law.