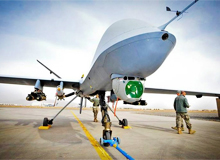 On 29 April 2014, we hosted a day conference on Targeted Killing: Clearing the ‘Fog of Law’ at the University of Exeter (see the conference flyer here).

The event started with a presentation by Professor Michael Schmitt on ‘Extraterritorial Lethal Targeting: Deconstructing the Logic of International Law‘. Reviewing the current state of the debate on drone warfare, Professor Schmitt noted that some of the earlier confusion surrounding the topic has now been dispelled, although certain areas of disagreement do remain. In particular, the fact that drones move easily across borders raises challenging questions about the jus ad bellum as well as questions about the legal geography of the law of armed conflict.

Acting as a respondent, Professor Charles Garraway challenged some of the underlying assumptions of Professor Schmitt’s paper. He pointed out that before 9/11, terrorism was understood primarily as a question of law enforcement. Treating it from the perspective of the law of armed conflict and the conduct of hostilities is not necessarily a more fruitful approach, as the legal disagreements canvassed by Professor Schmitt illustrate. In this context, Professor Garraway highlighted the difficult relationship between the law of armed conflict and international human rights law, a question to which the audience returned a number of times during our discussions.

Speaking as the second respondent, Dr Anicée Van Engeland approached the problem from a slightly different perspective. She emphasized the need to maximize humanitarian protection, discussing the controversy surrounding the duty to capture rather than kill and the application of the precautionary principle.

In the afternoon, Major General (ret) Jerry Thomas CB DSO offered his personal view on drone warfare entitled ‘UAV Strike Ops: A Commander’s Personal Perspective’, with Dr Aurel Sari acting as a respondent. Our speakers generated a lively discussion among the audience, which included members of staff, students and legal advisors and professionals.

The event was hosted jointly by the Network for Religion in Public Life and the Exeter Research Programme in International Law and Military Operations convened under the auspices of Strategy and Security Institute.