Jus Post Bellum and the Status of Foreign Armed Forces 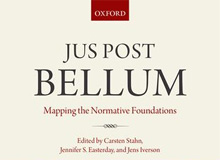 Foreign armed forces frequently play an important part in the transition from a state of conflict to a state of peace, yet their presence more often than not is a source of controversy. Under these circumstances, we may legitimately expect the rules of international law governing the legal status of such forces to serve a dual function: the relevant rules should lay down certain general standards of behaviour and provide a framework for interaction between sending States and host States, thus injecting a measure of predictability and procedural legitimacy into an otherwise highly volatile legal and political setting. The chapter argues that two distinct concerns relating to the legal position of foreign forces arise in post-conflict situations: the effect that changes in the legal basis of their presence have on their legal status and the need to balance the principle of territorial sovereignty and the jurisdictional exemptions of foreign forces in a manner that reflects the specific features and demands of post-conflict environments. As this chapter shows, both of these two concerns point towards the need for a more contextual and dynamic understanding of the legal status of foreign forces deployed in post-conflict situations. Such an approach provides greater conceptual clarity and offers a vantage point from which the position of sending States and host States can be critically assessed.