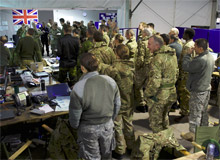 I have recently returned from RAF St Mawgan near Newquay in Cornwall, where I participated in the Allied Rapid Reaction Corps’ main exercise for this year, ARRCADE FUSION 2013. Running for a period of two weeks and involving over 2,000 military and civilian personnel, the exercise was designed to ensure that the ARRC maintains its operational readiness as part of the NATO Response Force.

As I knew from first-hand experience that Newquay gets a bit chilly at this time of the year, and having been advised to pack a ‘very warm’ sleeping bag, I arrived early in the morning kitted out like I was going on an Arctic expedition. It soon turned out that I erred on the side of caution by some margin, as the climate of the command and accommodation tents more closely resembled nearby Eden Project’s tropical biome than a windswept Cornish field in the middle of November.

Once I received my access pass and was given directions to the Brew Tent (serving coffee and tea, but bring your own mug), I was guided over to LEGAL—comprising two desks, four chairs, laptops and the legal advisors. And a supply of cookies and good humour.

This year, I specifically asked to be treated less as a visitor and more as another pair of hands on deck. Someone clearly got the message, as within the first five minutes of my arrival I was bombarded with about a dozen questions on a range of legal conundrums. Although the pace was not quite as relentless as I imagine it must be in real life operations, the questions kept rolling in at a steady rate throughout my two-day stay.

My participation in ARRCADE FUSION 2013 once again confirmed two important lessons. First, legal advisors deployed on operations must master a wide spectrum of international law. During the two days I spent with the ARRC, I was confronted with questions relating to the use of force, naval warfare, international refugee law, the law of neutrality, international human rights law, State responsibility, the classification of conflicts, various aspects of international humanitarian law, intelligence and the law of Chapter VII of the UN Charter. Quite a mix, really. Second, bringing together practitioners and academics in a setting such as this one offers real rewards to both sides. To me, the constant stream of legal problems requiring a more or less instant solution provided a refreshingly practical perspective on the law, while I believe my hosts benefitted from my expertise and second opinion in a number of subject areas. They certainly made me write memos.

Overall, participating in ARRCADE FUSION 2013 was a thoroughly enjoyable experience both personally and professionally, something of a cross between attending Glastonbury (save the music) and going on an international law field trip.