Better Get A Lawyer: Are Legal Constraints Defeating Britain’s Armed Forces on the Battlefield? 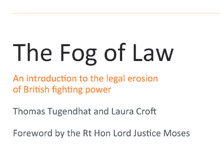 In October 2013, the Policy Exchange, a British think tank dedicated to the development and promotion of new policy ideas, published a Report entitled ‘The Fog of Law: An Introduction to the Legal Erosion of British Fighting Power’. The Report makes fascinating reading and deserves serious attention. Written by Thomas Tugendhat and Laura Croft, its aim is to explain how the cumulative effect of legal developments taking place over the past decade has undermined the ability of Britain’s armed forces to operate effectively on the battlefield. In this post, I offer some critical thoughts on the report.