Human Rights in EU Crisis Management Operations:
A Duty to Respect and to Protect?

Over the course of the last decade, the European Union has launched more than twenty crisis management missions, including large-scale military and civilian deployments in the Balkans and more modest security sector and monitoring missions in Georgia, Guinea Bissau and elsewhere. The purpose of the present working paper is to assess the role of human rights and fundamental freedoms in the crisis management operations led by the EU. This working paper – edited by Aurel Sari and Ramses A. Wessel − brings together contributions from recognized experts on two cross-cutting themes: the duty to ensure respect for human rights and fundamental freedoms in the conduct of EU crisis management missions and the contribution that such missions make to the Union’s long-standing policy of promoting human rights at the international level. 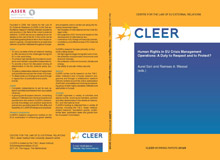 The choice of these two themes reflects the dual role that human rights play in the external activities of the EU. On the one hand, its founding Treaties direct the Union to respect human rights whenever it acts on the international scene, including in the field of crisis management. On the other hand, the promotion of human rights at the international level is one of the principal foreign policy objectives of the EU’s external action as a whole. In practice, the implementation of this dual commitment to ensure respect for and to promote human rights raises a series of questions. These range from the consistency of the regulatory framework and the EU’s impending accession to the European Convention on Human Rights to more general questions about the extra-territorial applicability of the relevant legal instruments and the EU’s potential and willingness to act as a role model for other organizations in this field.

The contributions to this working paper engage with a number of these issues. Hadewych Hazelzet argues that over the past decade the EU has made a very important indirect contribution to human rights protection by helping to build the rule of law and stability in many post-crisis situations around the world. Yet, it remains difficult to explicitly integrate human rights concerns into the missions’ mandates. Gentian Zyberi addresses the question of to which extent the EU would be bound by general principles of international law, including a large number of international human rights standards. The legal framework governing the protection and promotion of human rights at EU level is analyzed by Frederik Naert, who analyses the relevant provisions in the EU Treaties. As to the application of the European Convention on Human Rights, Heike Krieger argues that the judicial enforcement of civilians’ human rights during military operations abroad is a highly contentious issue, because of the large number of unresolved legal issues. Marten Zwanenburg takes up the question of the application of international humanitarian law and argues that the EU may indeed itself become a party to an armed conflict when an EU-led operation becomes involved in hostilities. Finally, the democratic oversight of the application of human rights principles by the EU is analysed by Wanda Troszczynska-Van Genderen in discussing the human rights-related priorities of the European Parliament in relation to the Union’s security and defence policy.